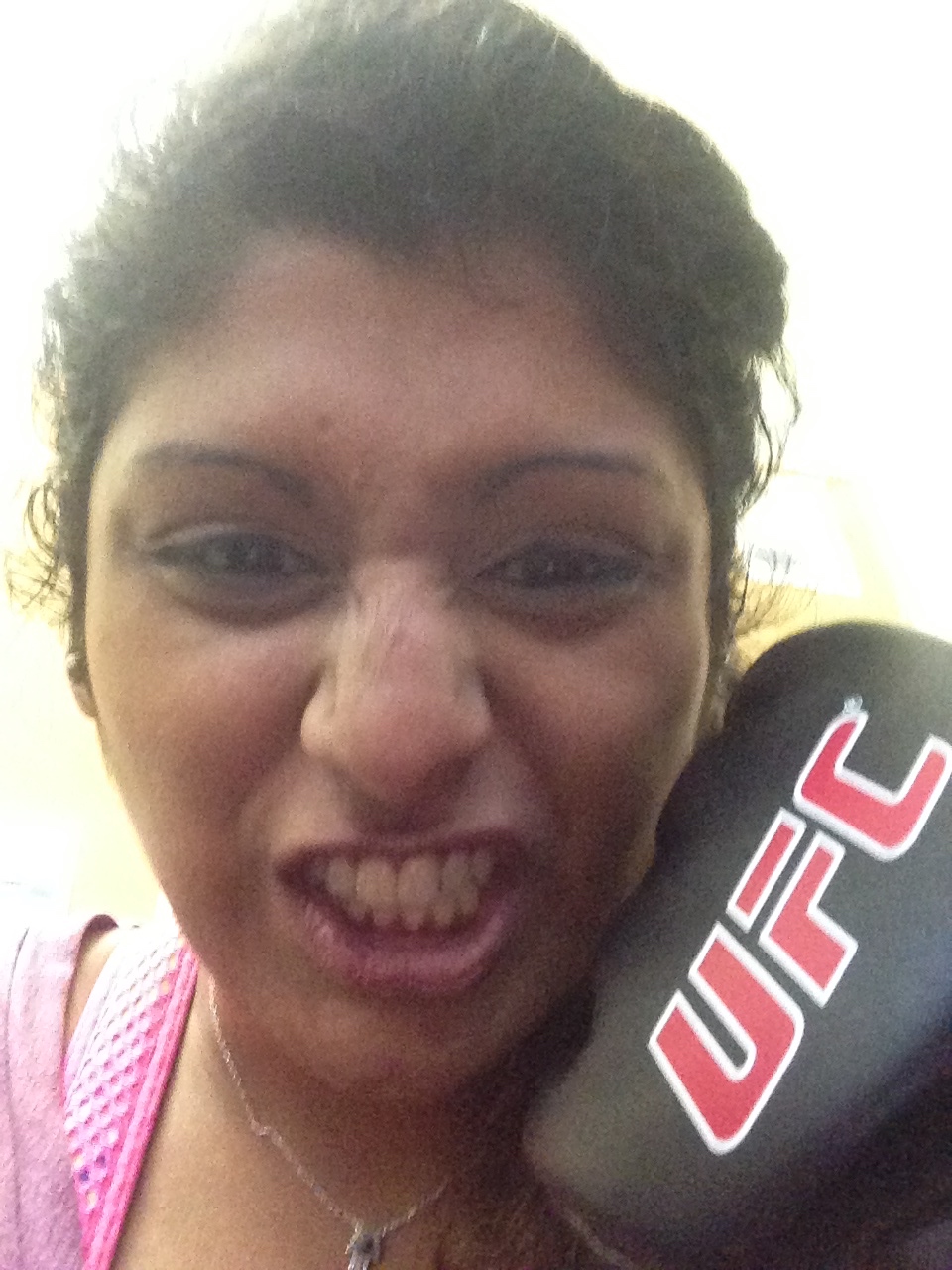 It seems blasphemous to kick box with trainers on. No, it is blasphemous to kick box with trainers, much less punching a kid-sized “heavy bag” in a ballroom dance floor. Today, I’m beyond frustrated. I’m used to going 110 percent at class and coming out with permanent hematomas (black spots around my pinkie knuckles), dripping with sweat, and a satisfying ache in my muscles.

Today, I did not get that result. Instead, I was told to hold back on my punches, follow the beat of the techno music, improperly instructed to throw knees, and only worked one side of my body.

I hate to complain, but I had high hopes for this class. I wanted the skin on my knuckles to peel. I wanted to pull down the bag and throw stomach-buckling jumping knees. I wanted combos. I wanted circuits. I even wanted bag calf raises and Spiderman pushups–two of my arch nemeses. Granted, I did sweat. We did do a few jab-cross-duck combos, but it was essentially an aerobics class. If you know me, you know how much I HATE aerobics. We were told to “front kick” to an eight-count beat, and don’t get me started on how round kicks are “taught.” I suddenly felt self conscious in a class where I usually feel like a bad ass–comfortable in my own skin.

I don’t want this to sound arrogant or insulting. I’ve had amazing instructors in the past. They taught strength, power and balance. They taught athleticism and correct fighting techniques–even for fitness kickboxing. My power was embraced (on the heavy bag). I know Fabio is just catering to the wants and needs of the all-female class he has (who have little experience or interest in fighting), but how I wish I could give him my two-cents in Italian.

I think what angers me more is the dichotomy I see between the men and women here. The females are treated like frail little birds who need protecting. I’d love to be proven wrong, but it’s happened in every fitness class I’ve attended. Even something as equalizing as jiu-jitsu had gender imbalances.

Instead of having a senior (male) instructor work with the females, they separated the class into to male and female. I was essentially on my own teaching the karate ladies, who were trying class for the first time. By any other circumstance, I would have embraced this–whether it it’s to have same-sized opponents, skill levels etc. It was solely because we had xx chromosomes. When we were practicing takedowns, the females were given an extra pad, while the males went on the mat, and we never rotated partners. That was just the tip of the iceberg. I can’t even begin to relay my irritation.

On top of that, men think it’s appropriate and humorous to open the door, and stick their heads into class just to watch females exercise. If you wouldn’t want us watching you lift, then don’t come in to watch us punch a bag or do a total body class. I’d rather you come in a tight leotard, ready to sweat with us than you feeling the need to gawk.

Let a female feel strong. Strength is beauty. Beauty is strength. Think of Ronda Rousey! You don’t know how satisfying and empowering it is to watch a heavy bag fall to the floor after you’ve thrust a sidekick at it. If you do, you’ve done it (and know the feeling). I miss cover-and-clinch. I miss my shin pads and my UFC grappling gloves. I miss guard passes and people who know how to roll. I miss sparring and feeling like an equal – like one of the guys. I miss my vicious ballerinas, whose back-fists could knock out teeth and whose locker room chatter is intentionally inclusive. I think, most of all, I miss feeling satisfied.

Maybe satisfied isn’t the correct word choice, but it seems apt right now. While watching myself throw punches in the mirror of the dance floor, I looked at myself properly for the first time since moving. I didn’t recognize the body attached to the head. Everything feels loose (except the clothing–that is tight). I know it’s the lack of movement and the changing diet, but I still have hope.

It looks like I’m going to have to try out for fight club when it comes to kickboxing. I refuse to adapt. I want to feel tough again. I want my biceps to have that satisfying line of definition and my calves to bulge. Either I need my own heavy bag, or it’s time to look into Italian strike zone. I think I’ll have to be greeted by a mafia Chihuahua if I want to have proper MMA kickboxing. It’s off to Asterix for another shot. This time, I’m going down fighting.