It’s been 16 days since the Indian street food night, and I’m STILL recovering from leftovers. It’s the happy curse I can’t cure. From frozen chickpea giveaways to multiple dinner party invites, I’ve been trying to steadily decrease the samosa filling that was fortunately bestowed upon me after the event (if you haven’t learned by now, the university isn’t big on food waste). Being that this week is deadline week for my freelancing, I naturally was procrastinating writing stories. The best way to do that? Look into the fridge-freezer and try to create something.

I stared at my de-thawed and sad potato-pea mixture with discontent. There are few things sadder than the sight of mushy, freezer-burned potatoes. So, while listening to “This American Life,” I did a very American thing: I deep-fried them to a golden crisp. That’s right, I was rolling in semolina-potato goodness. But before I could fry them, I needed to get rid of all the water. Strain, squeeze, strain, spice, and balled up later, 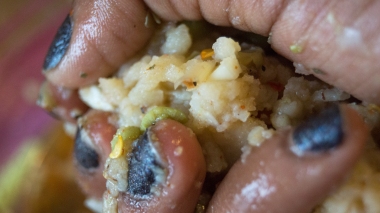 I had a lineup (there will be many more puns, brace yourself). 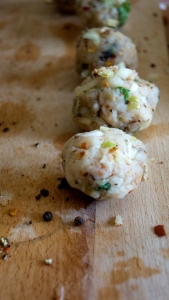 First up was the egg, rounding second was semolina. At times, it was a back-and-forth between egg and semolina, but in the end all was won with the batter.

Then, it was to the frying pan. I heated sunflower seed oil, and let them fry until golden brown. This is how they looked.